No fewer than 11 communities in Ikwo local government area of Ebonyi State on Friday at Igbudu community resolved to abolish the practice of female genital mutilation.

The people made the decision at the public Declaration on the Abandonment of FGM in Ikwo Local Government Area.

The event was organised by the Civil Resource Development and Documentation Centre (CIRDDOC) with support of the United Nations Fund for Population Activities (UNFPA). CIRDDOC is an independent, nongovernmental, and not for-profit organisation established in 1996 and committed to the promotion and protection of human rights, strengthening of civil society and the promotion of rule of law and access to justice.

Leaders of the communities in their separate remarks said that they resolved to abandon the harmful practice because of its health implications and its violation of the reprodictive rights of the woman and girlchild.

Eze Dominic Alo, the traditional ruler of NdufuAmagu community commended the organisation for promoting the campaign against FGM practice and noted that his community would join others in the council to stop the inhuman practice.

He said that the message would be passed down to the practioners and other members of the community while efforts would be made to effectively sensitise the people on the dangers of the act.

The traditional ruler was represented by Chief Dominic Nwuruku. He said: “I want to make a commitment and to assure that the message and lessons learnt from this exercise will be taking down to our various villages, churches, schools and markets.

“This is to ensure that the practice of FGM is completely eradicated in the local government area.”

Mr Igwe Okede, the town union president of Igbudu community explained that the people of the community were ready to abandon the practice.

“We are not only declaring the abandoning of this age -long harmful practice but we will ensure that we enforce compliance on community members.

“I am pledging to work to ensure that no community in our LGA is involved in this wickedness and gross violation of rights of the girlchild and women,” Okede said.

Also speaking, Mr Amechi Okorie, the town union president, Ndiegu Amagu called for synergy among stakeholders, government and the Civil Society Organizations to ensure the elimination of the practice in Ebonyi communities.

The community leaders, on behalf of their various communities, signed a document publicly outlawing the practice in their respective domains and pledged to constitute monitoring committees to enforce compliance of the declaration.

Earlier, Ms, Onyinye Okaah, Executive Secretary of CIRDDOC, said that the public declaration of abandonement of FGM implied that community leaders were no longer in support of the practice.

Okaah, while applauding the communities for renouncing the practice however, noted that some people could still indulge secretly in the act.

She urged stakeholders to constitute FGM committees that would enforce the decision of the communities including placing local fines on violators.

Some victims who participated at the event also narrated a harrowing experience they underwent and vowed to leverage the campaign to sensitise other women in their communities.

Mrs Chinenye Okeworo, a victim in her late 30s said that she underwent the practice before her first child and lamented that she was pushed to do it by her father.

“I didn’t want to do it; it was my father who pressurised me saying that if I refused that I’ll give birth to an imbecile that was why I yielded,” she said.

Also, Mrs Caroline Chukwu, another victim, said that due to the cutting that she didn’t usually have sexual urge whenever the husband wanted to have sex with her due to pains she experienced each time she had sex.

Ebonyi is one of the states with highest prevalent rate of female genital mutilation in the country, while Ikwo council area has the highest number of cases in the state. 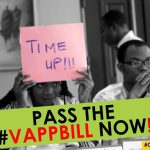