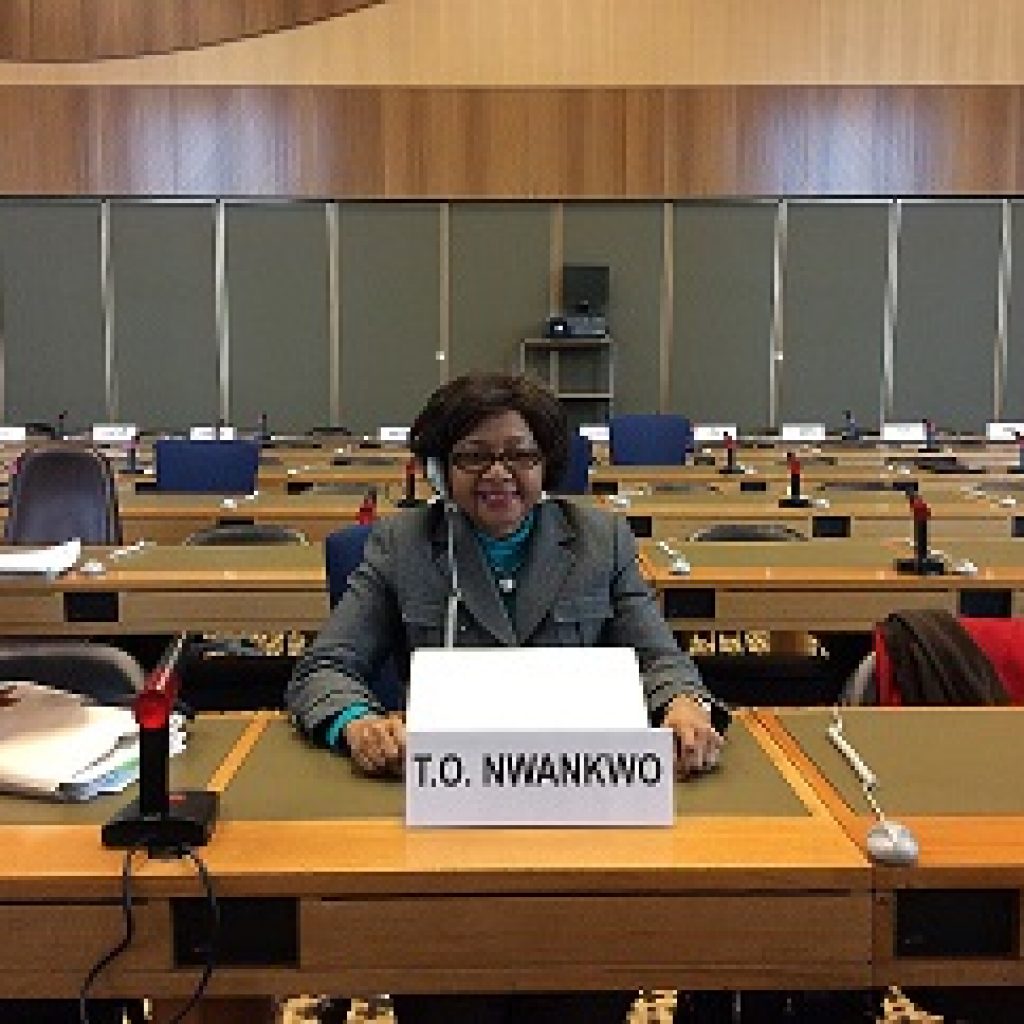 1.2 EDUCATION
Oby started her long and accomplished academic career at Queen’s primary school, Kano and then began her secondary education at St. John of God Secondary School, Awka where she distinguished herself. At a very young age, she showed her determination to succeed in life and make a difference in the world. Despite being significantly younger than her peers, Oby was very boisterous in secondary school. She was often described as “beautiful, petite, lovable, and disciplined” by her peers. Not only was she known as an intelligent, devoted and confident student, she was an excellent debater, poet, dancer, actress and athlete. She popularly starred as “Ima” in a stage drama named “I Must Marry Ima”, which made her well-known in most secondary schools in Enugu. She was also the top choice to represent St. John of God Secondary School, Awka at a wide-range of competitions throughout Nigeria.

Oby was industrious, enterprising, and innovative as a secondary school student. It is often said that she must have drawn a wealth of inspiration from her late dad who remarkably led the Committee that ushered in significant development in post-war Awka. She had genuine and energetic passion for adding value to the lives of others, and was an inspiration to her classmates and teachers.

Oby started her university education at University of Calabar where she studied French and English language for a year. She transferred to the University of Nigeria, Nsukka, Enugu campus, where she obtained her LL. B (Bachelor of Laws) with Honors in 1979 and her LL.M (Master of Laws) Degree in 1992. She obtained her B.L (Barrister-at-Law) Certificate from the Nigerian Law School and Nigerian Council of Legal Education Lagos in 1980. She is also a graduate of the Women’s Global Leadership Institute, Rutgers University, New Jersey (1999), the Academy on Human Rights & Humanitarian Law, Washington College of Law, American University, U.S.A. (2003) and OMCT Geneva where she received training on “Using International Human Rights Instruments in the Enforcement of Human Rights” by OMCT Geneva 2002.

1.3 FAMILY LIFE
On December 1, 1979, she married the love of her life, Engr. Victor Uzoma Nwankwo (now late). Victor and Oby’s love story is as intriguing as a Disney blockbuster. Oby met Victor while studying law at the University of Nigeria. They immediately fell in love. However, Oby’s father, His Royal Highness, the Late Obi Alfred C. Ndigwe, a knight in the Catholic church, opposed the union because Victor was an Anglican. Oby, as tenacious as she was in character, stood her grounds and insisted that if she was not permitted to marry Victor, she will not marry anyone else. When asked what she admired most about Victor, she stated that he was very responsible, caring, affectionate and down-to-earth. The love and dedication between Victor and Oby was so admirably steadfast, that Oby’s father eventually gave his blessing. In fact, Oby’s dad grew so strongly fond of Victor, he gifted him a chieftaincy title, Ugwumba I of Awka in 1996.

1.4 CAREER
Oby Nwankwo was not only a daughter, sister, mother, grandmother, aunt, friend and great mentor; she was also a lawyer of over 30 years with post-call experience in litigation, judicial duties and development work. During the course of her career, she made her mark in various countries, including Nigeria, Liberia, Kenya, Lesotho, South Sudan, and Switzerland.

She served as a Chief Magistrate in the Anambra State Judiciary for 23 years. Since her voluntary retirement from the judiciary in 2004, she was in the forefront of the campaign for respect for women’s rights, gender equality and good governance. She was a gender expert/advocate, a human rights activist, an election monitor, a community mobiliser, an independent development consultant and a trainer/Facilitator.

She represented Africa on the screening Committee of the Coalition for the International Criminal Court (ICC); she was also a member of the ICC Gender Justice Team and Advisory Board member of Global Fund for Women among other agencies.

She served as Chairperson of the Civil Society Coordinating Committee on Election Reform (CSCC), an umbrella organization for all civil society organizations engaging the constitutional and electoral reform processes in Nigeria. She was the pioneer Coordinator of National Coalition on Affirmative Action (NCAA), a network of Civil Society Organization committed to the adoption of affirmative action as an effective strategy for increasing the number of women in governance. She was a member of the Monitoring and Evaluation Network of Nigeria (MENN) and the Nigerian Bar Association. Oby Nwankwo presented numerous speeches at National and International fora and published several papers. She had extensive experience in gender based violence, gender analysis, gender mainstreaming, gender budgeting, advocacy, monitoring and evaluation.

On the platform of CIRDDOC, she represented Africa in the Steering Committee of the Coalition for the International Criminal Court (ICC), a member of the ICC Gender Justice Team and Advisory Board member of Global Fund for Women among others. She led the team that prepared the Women’s memorandum to the Uwais Committee on Electoral Reform and the Senate Committee on Constitutional Reform.

Oby Nwankwo also led in the campaign for the domestication of the United Nations Committee on the Elimination of Discrimination against Women (CEDAW) and the AU Protocol on the Rights of Women in Africa by the National and State Assemblies and the passage of the Child’s Rights Law in the States. She was a member of the National Committee of the Independent National Electoral Commission (INEC) Stakeholders’ Forum.

In January 2013, Oby Nwankwo was elected as Nigeria’s representative on the UN CEDAW Expert Committee for a 4-year term. She was re-elected for another 4-year term in 2016, where she served diligently till her demise. The committee monitors compliance by the 189 State parties to the Convention on the Elimination of All Forms of Discrimination against Women with their legal obligations under the Convention. She was elected Vice-Chair of the Committee in February 2017. Oby was also Vice-Chair of the Committee’s Working Group on Communications under the Optional Protocol to the Convention, which pre-screens individual complaints received by the Committee from women alleging to be victims of violations of their rights under the Convention.

During the examination of the progress reports submitted to the convention by the States parties Oby Nwankwo focused, among others, on women’s and girls’ right to health, including their access to sexual and reproductive health services. Oby Nwankwo was a brilliant expert, a distinguished lawyer and highly respected member of the Committee and made important contributions to its work. Her most recent contribution was conducting a confidential inquiry visit to the territory of one State party to the Convention to ascertain the existence of systematic and grave violations of rights under the Convention in that State party.

PUBLISHED PAPERS – Selected
– “Using CEDAW as a tool for mobilisation of Women’s Human Rights” presented at the Expo 2000, Baltimore, MD, USA.
– “Current Issues on the Domestication of CEDAW in Nigeria” – Published in the Journal of Obstetrics and Gynecology, 2005.
– “Achieving Gender Balance in the Context of International Frameworks/Commitments: Overview of Progress, Achievements, Gaps, Strategies, & Challenges” – Presented at the Commonwealth Secretariat’s workshop on Moving towards Gender Equality: Balancing Political Participation in Nigeria, 2005.
– “Culture and Tradition and Women’s Human Rights in Africa” presented at the N.G.O Forum of the World conference on Human Rights in Vienna Austria.
– “Women’s Rights are Human Rights” presented at a seminar organised by the British
– Council to mark the International Women’s Day.
– “Inheritance Laws of Women in Africa” presented at The Expo 2000 an international Conference organised by the Feminist Majority Foundation USA at the Convention Centre, Baltimore MD.
– “Legal Constraints in Population, Reproductive Health and Rights in Nigeria” presented at a Macarthur Foundation Strategy Workshop in Nigeria.
– “The Evolution of Gender Crimes in the International Criminal Court (ICC)” a paper
published in the Africa Legal Aid Journal, Ghana 2003.
– “Ensuring Justice to Women in the ICC: A Call to Action”: Article published in the ICC
Monitor; Journal of the Coalition for the International Criminal Court; Issue No. 33.
– “The Rome Statute of the International Criminal Court: A simplified and Abridged Version”
Published by the Nigeria Coalition on the ICC– 2006.
– “Effectiveness of Legislation Enacted to Address Violence against Women in Nigeria” –
Presentation at the United Nations Division for the Advancement of Women Experts’ Meeting on Good Practices in Legislation against Violence against Women, Vienna, May 2008.
– “Promoting an End to Impunity for Genocide, War Crimes and Crimes against Humanity by CSOs in Africa presented at the Consultative Conference on International Criminal Justice” Organized jointly by the Hauser Centre of the Harvard University, the United Nations and Macarthur Foundation; Sept. 2009
– “Reviewing the 50+ Years of Women’s Participation in Politics in Nigeria” WACSERIES Vol. 2 Num 1.2010.

WORK ON DOMESTICATION OF CEDAW IN NIGERIA
– Organised an international Public Hearing on CEDAW and Affirmative Action at the National Assembly in 2003 with resource persons from USA, South Africa, Brazil, Uganda, and Tanzania leading to the formation of a National Coalition on Affirmative Action.

– Championing the domestication of CEDAW and African Protocol on the Rights of Women in Africa at the Federal and state levels; in collaboration with the Federal Ministry of Women Affairs and with support from Open Society Initiative for West Africa. Two states have so far domesticated CEDAW as a result.

– CIRDDOC has been part of CEDAW Shadow Report writing and lately is in the forefront of the campaign for Government to partner with Civil Society in the preparation of Nigeria Country Reports on CEDAW.

– Has published and distributed over 10,000 copies of CEDAW in Nigeria.

Oby Nwankwo went to be the Lord on December 9, 2017 surrounded by her loving children. Even though Oby has left the physical world, her selfless life of service to humanity not only remains etched in our memories, but also keeps us striving to do more and more to keep her vision alive – through service. Oby is survived by her mother, siblings, children, grandchildren, and several uncles, aunts, cousins, nieces and nephews, who loved her dearly.