The 2018/2019 SNBTS will provide the states another opportunity and incentive to improve on their budgeting conduct – those that scored some points and are making efforts will showcase the improvement made since the last survey while at the same time, it will enable CIRDDOC and partners to find out if progress has been made on the 2011 and 2015 scores. The findings from the previous survey constitute a baseline against which future changes in political will and systems for transparency and participation at State level can be measured. This project will provide a basis for further comparisons of performance.

Nigeria has signed unto the Open Government Partnership (OGP), which is a multilateral initiative that aims to secure concrete commitments from governments to promote transparency, empower citizens, fight corruption, and harness new technologies to strengthen governance. Subnational (State) governments are also signing on. Over the next five years, OGP has the ambition to become a positive global movement for openness and deeper democracy, and as a countervailing force against the rise of closed government, at both the national and subnational level. This will require national and subnational governments participating in OGP to have a strong focus on implementing their Action Plans and sharing knowledge across different countries and types of government, so that OGP can be a home of innovation, learning, and collaboration for more open governments around the world. In Nigeria the subnational budget transparency index will serve as baseline for the Subnational OGP Fiscal Transparency thematic area of the Action Plans.

Information leads to change – The State’s Budget Transparency Survey results serves members of the public, legislators and civil society advocates, journalists, researchers, academicians, policy makers, economists, development specialists, and others interested in the use of government resources. It is intended to provide an in-depth set of measures that government officials might adopt to improve their budget performance. Evidence shows that when citizens have access to information and opportunities to participate in the budget process they are able to improve the decisions made about what to spend public money on and the quality of how the money is actually spent. That means that the allocation of scarce public resources can be potentially more equitable and effective.

Goal: The goal of the proposed project is to build on the successes recorded in the just concluded project in raising awareness and consciousness of states on transparency and participation of the budget process and instilling a spirit of ‘competitiveness’ among states towards the promotion of increased public access to government budget information.

CIRDDOC will work with civil society partners in the targeted states to use the Sub National Budget Questionnaire to collect the data for the Survey. All the states of the Federation will be involved in the proposed study. The survey instrument will be implemented in a round of research of two years’ duration. CIRDDOC and its partner organisations with funding support of DFID, and technical support from International Budget Partnership (IBP) will compile, and analyze the data to produce the second published version of the Sub-national Budget Transparency Survey for the Federation. We suggest that at least four rounds of research should be undertaken, with published results to allow for comparisons of performance over time with the development of clear trends and their analysis.

All of the researchers who would be responsible for completing the Sub-national Budget Transparency Survey Questionnaire will be sourced from academic institutions or civil society organisations, preferably from the State where the work is to be undertaken. The mandates and areas of interest of the research groups will vary widely, but all will have a common interest in promoting access to information during each of the four phases of the budget process, in strengthening the role and powers of the legislature, and in the performance of the supreme audit institution. Most will be groups with a significant focus on budget issues; others will be researchers who are experts involved in budget matters on a daily basis. One researcher or group of researchers within an organization from each of the targeted states will be responsible for submitting one completed questionnaire for that state. Thus, the results presented for each state will be based on a single completed questionnaire.

In a round of research, the researchers will be expected to collect data and complete the questionnaire in 4 – 5 months. No events or developments that occurred after September are taken into account in completing the questionnaires. Researchers will be asked to provide evidence for their responses, such as citations from budget documents; the country’s laws, or interviews with government officials, legislators, or other expert on the budget process.

Once the questionnaires are completed, CIRDDOC and IBP staff will undertake an analysis of each questionnaire and in most cases will spend three to six months in discussions with researchers to review the questionnaires. This staff analysis will focus on ensuring that the questions were answered in a manner that was internally consistent, as well as consistent across states. The answers will also be cross-checked against publicly available information. This will include those budget documents that states made available on the Internet; the International Monetary Fund (IMF) Reports on the Observance of Standards and Codes (ROSCs), covering fiscal transparency; IMF Article IV reports; World Bank documents and publications, including Public Expenditure Reviews; and the Organization for Economic Co-operation and Development-World Bank budgeting practices database.

CIRDDOC will provide researchers with a Guide to the Sub-national Budget Transparency Survey Questionnaire (based on the results and lessons learnt from the 2011 and 2015 surveys), made available on the CIRDDOC website. The guide will outline the research method to be used in completing the questionnaire and introduce researchers to internationally recognized good practices and concepts related to budget transparency and public expenditure management. The guide will also provide detailed explanations on how to choose between possible responses and the assumptions to use in answering each question.

After the CIRDDOC /IBP staff review of the draft questionnaires, they will be submitted to two peer reviewers, whose identities will not be revealed to the researchers. The peer reviewers will be required to be independent of both the government and the research organization of the researcher. The peer reviewers will all be individuals with substantial working knowledge of the state being reviewed and its budget system. They will be identified by searching bibliographies, professional contacts, the Internet, and past CIRDDOC conference records. Peer reviewer comments can be !9 seen in their entirety in the published version of the questionnaires, to be made available at www.cirddoc.org. Governments of the states surveyed will be invited to provide their comments in the published version of the questionnaire.

The decision to invite a government to participate is made at the request of the research organization responsible for completing the questionnaire. CIRDDOC and IBP staff will review peer reviewer comments to ensure that the comments are consistent with the study’s methodology as outlined in the Guide to the Sub-national Budget Survey. Transparency Survey Questionnaire: Any peer reviewer comments that are inconsistent with the guide will be removed, and the remaining comments will then be shared with researchers. Researchers will respond to comments from peer reviewers and the government, if applicable and CIRDDOC/IBP editors will referee any conflicting answers to ensure the consistency of assumptions across states in selecting answers.

After analysing all data contained in the questionnaire, CIRDDOC and the chief consultant will afterwards write a draft report where all states will be ranked based on their performances. The draft report will be accordingly discussed with the funding partner – if given approval, CIRDDOC will go ahead and print the report. In the end the SNBTS report will be launched at the national level – advocacy follows. 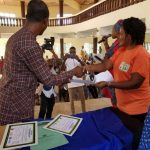